James Kribbs was a manager at Hillcrest Cadillac on Wilshire Blvd in Beverly Hills, California and worked with a man named Jack Patrick.
They went out to eat one Friday and had a small conversation about what they would do if they could start a company that converted Cadillac’s into trucks and station wagons.
After the meal they left and my dad James Kribbs came home for the weekend without giving any serious consideration concerning the conversation he had with Jack.
When he went back to work in Beverly Hills, Jack Patrick brought in 3 drawings he made during the weekend.  The drawings were ideas of what the Cadillac conversions could look like.
My dad was impressed with the drawings and decided to start the company.
He started "Traditional Coach Works" in Chatsworth, California while doing business with Hillcrest Cadillac.
The very first conversion was a Cadillac truck that Evel Knievel bought.  Mr. Knievel liked the truck and ordered a white one with extra chrome that was used in his movie.


These drawings were from Jack Patrick in 1974.
He did these the weekend my dad went home and forgot about the conversation.
Jack showed him the drawings when they returned to work on Monday.
My dad (James C. Kribbs Jr.) saw the drawings and decided to start the company named Traditional Coach Works. 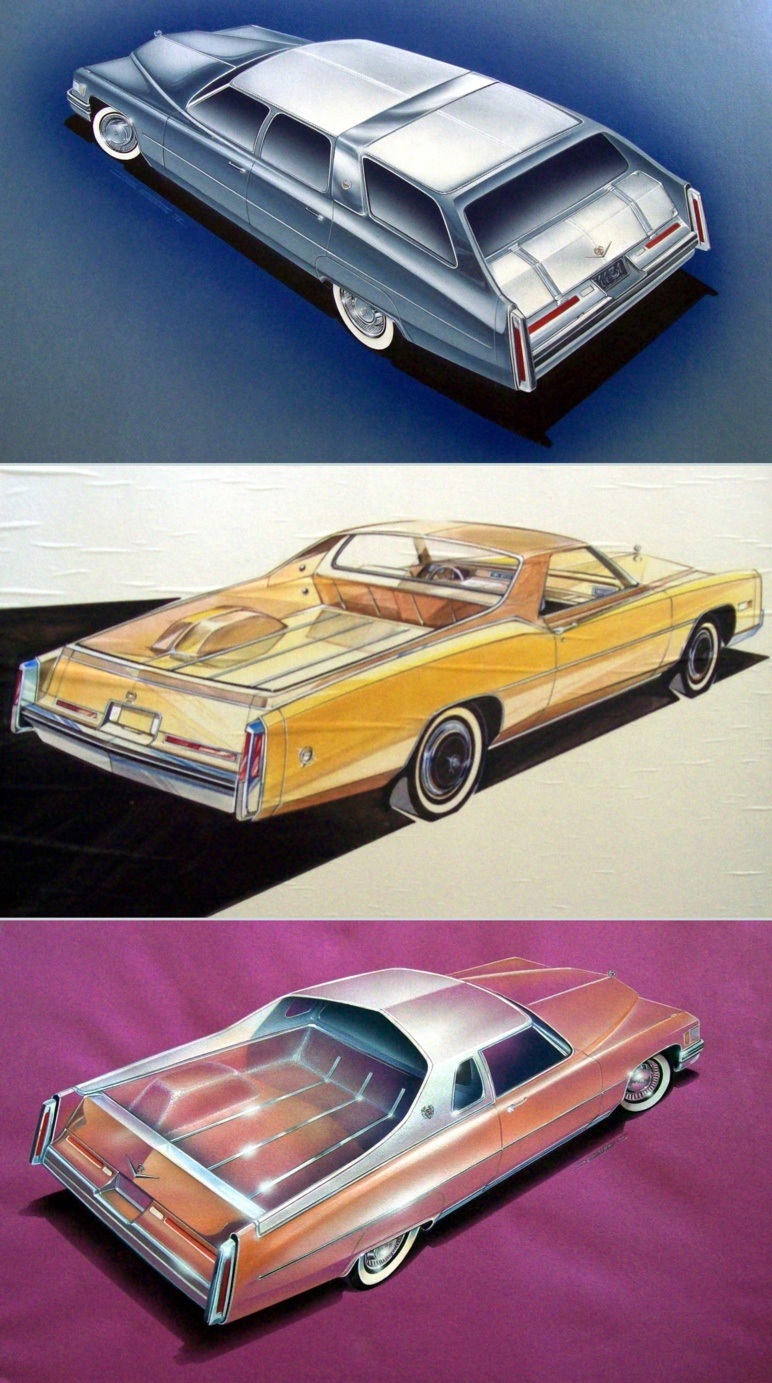 
I took this picture in Beverly Hills, California.
It was September 1974.
This Cadillac was the first one converted at Traditional Coach Works in Chatsworth, California.
Evil Knievel bought it and let them display it for awhile. 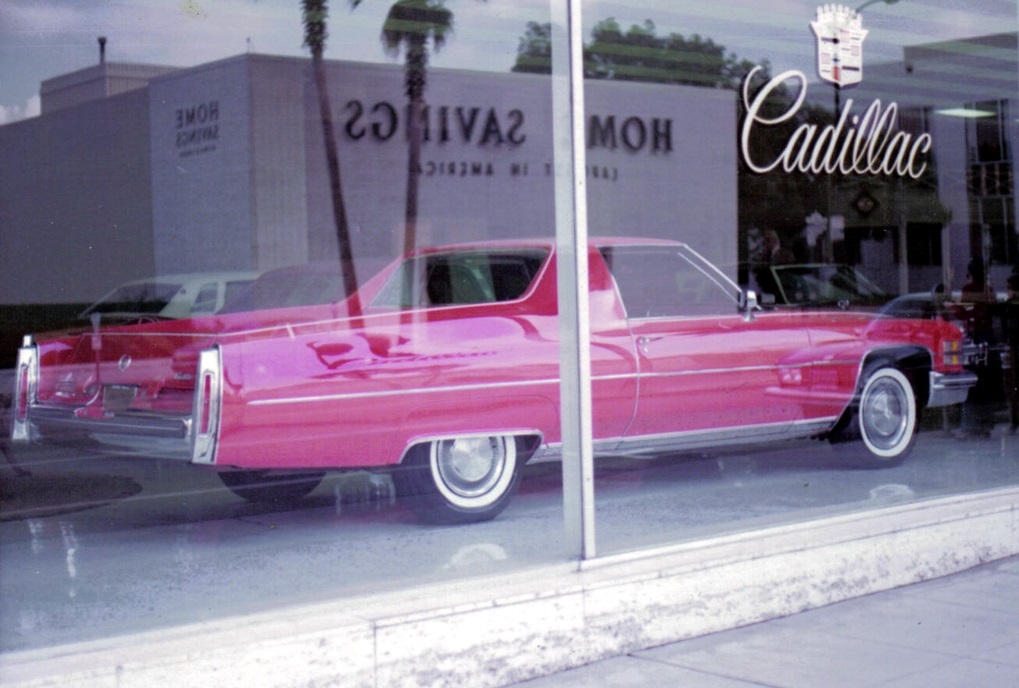 Evil Knievel also bought a white Cadillac truck that he used in his movie.


Next is a 2 sided brochure my dad had printed.
This is from the first printing in 1974. 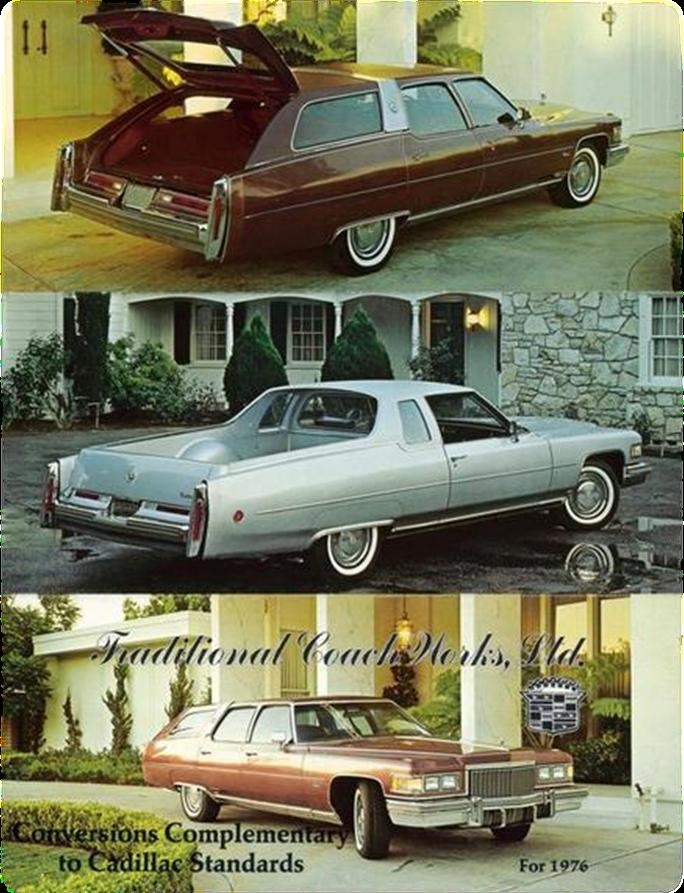 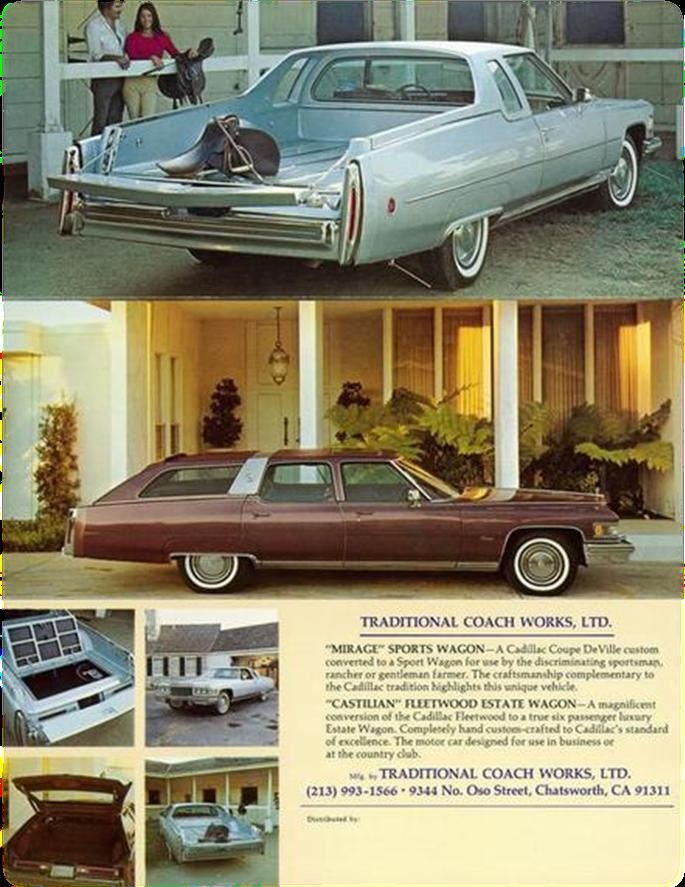 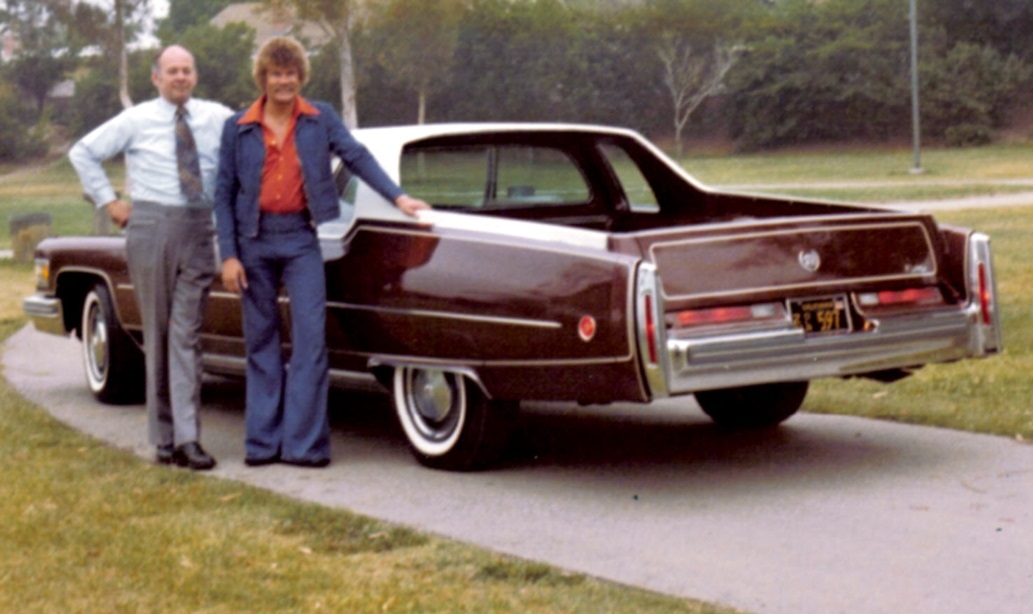 Between the years 1968 and 1972 we lived in Memphis, Tennessee where my dad worked at a place called Madison Cadillac. During those years Madison Cadillac was rated one of the best ten dealerships in the country. It was at Madison Cadillac where my dad met Elvis and Isaac Hayes.
Elvis Presley did business at Madison Cadillac and there he also bought cars for other people.
There were times when Elvis would drive around Memphis and help someone who was poor.
To their surprise, Elvis would introduce himself and buy them a new Cadillac from Madison’s.
Elvis may have been flashy on the stage but my dad said whenever he came to the dealership, Elvis was a courteous and friendly man like other people.

Sometimes when Elvis left town, he gave others permission to drive around his property at Graceland.
My dad was one of the people he let on the property.
Dad drove us to Graceland one Sunday where we met Elvis’s father who was the guard at the gate.
My dad introduced us all and Elvis’s father opened the gate for us.
As we were driving around, my mother told us about Elvis’s mother. Elvis let his mother raise chickens on the grounds at Graceland. Elvis didn’t forget where he was raised and that’s why we think he was one of the finest persons my dad met.

The picture below is of a Cadillac Isaac Hayes bought at Madison Cadillac. Isaac Hayes also helped people in Memphis after Martin Luther King was shot. One of things he did for Memphis was give free concerts for many who were upset. He did business with Madison Cadillac and on one of his cars, Isaac had all the chrome work on the car gold plated. Even the screws to this car were gold plated.
I remember my dad saying something about Isaac when he was at the Memphis airport.
While my dad was standing outside waiting for a ride, some police cars appeared with lights flashing and their sirens on.  Then Isaac drove up in his gold plated Cadillac.
Isaac could be flashy when he was in public. 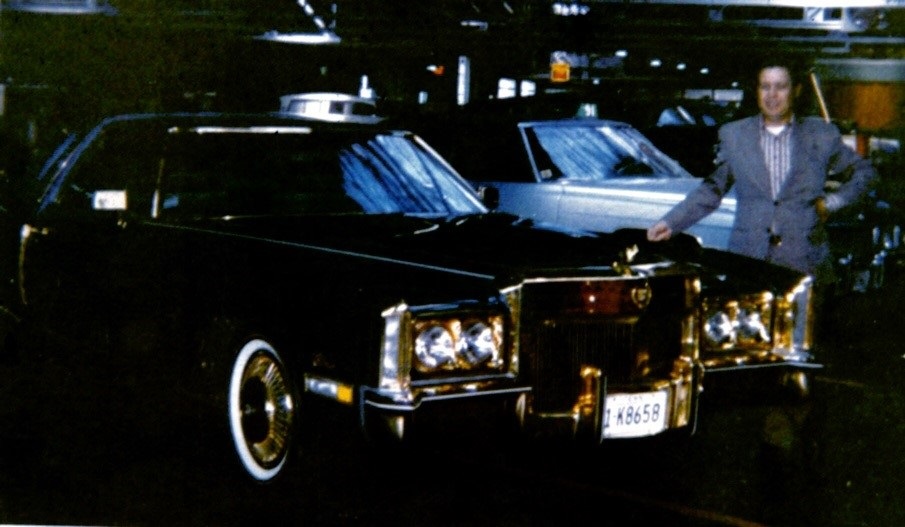 Thank you for your thoughts.
I hope you enjoy the photos and letters.

Thank you, Michael, and thank you James Kribbs for your contribution to this world.  Legendary, no doubt. 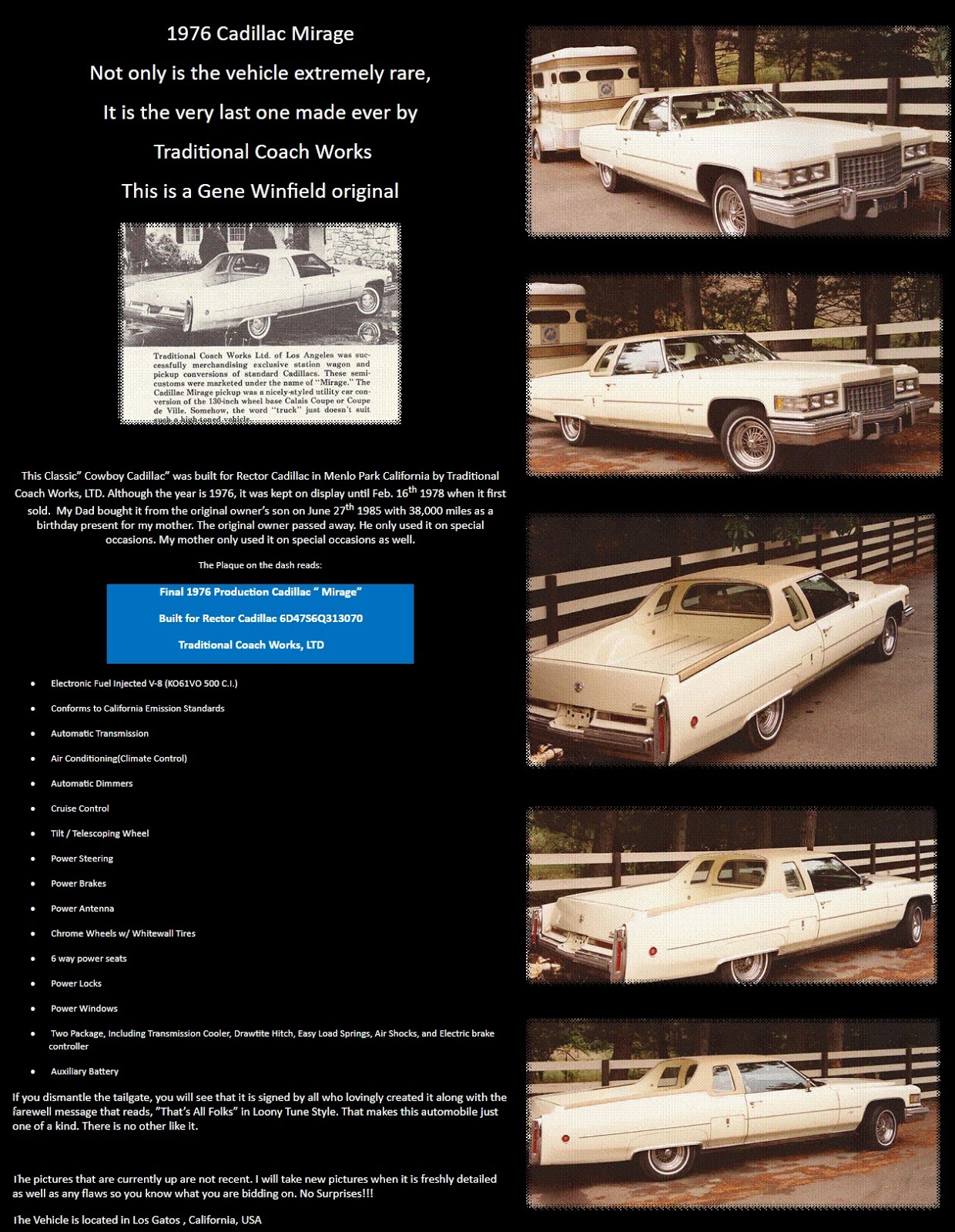 Somehow a man named Gene Winfield is given credit for the design of these Tradition Coach Works conversions.


James C. Kribbs is the man that designed the conversions with the support of Jack Patrick.